It’s a Sunday evening and I’m laid across the entire sofa attempting to watch a movie but my brain is well and truly caput. Usually this would be due to a hangover from a Saturday night out but today it’s because I’m feeling really tired from a hectic, exhilarating and amazing few days.

I’ve spoken before about how much THT’s myHIV service, and in particular the Community Forums section of the site, has benefited me since I came across them in November 2011. It soon became clear that a story about my journey with myHIV would be a great way to showcase the amazing work the charity do whilst also sending out an empowering and very personal message which would connect with the guests on the night.

Being interviewed on film in my own flat wasn’t too strange, talking about myself and my life with the virus is something I’ve got very used to doing over the past couple of years or so. It was strange though when I had to walk around Manchester city centre with a camera behind me, following me about, or even worse standing still on a busy street just staring into it! But the process was something very different to anything I have done before and it was a fun experience.

After a little hiccup the film was finished and the focus moved to my speech. I’ve never had to write a speech as such before, I knew what message I wanted to send out, sticking with my commitment to empower people living with HIV, increase visibility of the virus and end stigma. I was confident that the finished version would engage with those who would be in the room.

So the day itself arrived, I was up early to get the train down to London, arriving in the sunny capital feeling ridiculously excited and nervous at the same time, a thousand thoughts colliding in my mind about how the night could go. A quick shower and change at my dad’s place and it was time to ride the tube to the THT office. Whilst an amazingly glorious day for the event I could not have wished for worse weather being on the Underground in a suit, I don’t know how people work in London, yuk.

I was introduced to the incredible fundraising team who were all busy preparing to head over to the venue and shortly joined them there. Walking into the Merchant Taylors’ Hall for the very first time I encountered what seemed at first to be a massively vast space that my voice would have to fill… I made myself familiar with the hall and took a quick stand on the stage looking at all the empty chairs, was it too late to chicken out? Luckily my nerves seemed to subside when I distracted myself by helping out the THT guys, and before I knew it the sound check was done, I’d seen a clip of the film on the big screens and the guests were starting to arrive.

Sadly Richard was too ill to join me in London but I was thrilled that my sister was able to take his place as my guest and we were soon enjoying ourselves outside in the elegant courtyard with the guests. I got to chat to some of the THT trustees which was great and even got a little last minute inspiration from them too. Our host for the evening was Stephen Fry, he was as funny and interesting as he appears on TV, he’d watched the film and we had a little chat about it before he was whisked off to meet other guests.

The meal was gorgeous and as our plates were cleared the lights dimmed, the screens flickered and the wheel that currently sits in Piccadilly Gardens appeared onto the screen… this was it! I’d seen the final version of the film already but it was great to watch with everyone else, even if my heart was starting to beat loudly in my chest, the six or so minutes flew by and before I knew it Mr Fry was stood on the stage introducing me. 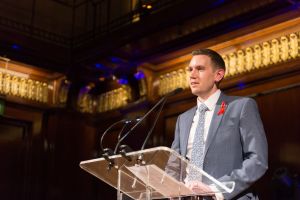 I don’t even remember the walk from my chair to the podium, and within a flash I was staring out into the room, obscured by the full force of what appeared to be a billion lights. And just like that I heard clapping and auto-piloted myself back to my seat. Stephen’s speech was fantastic and delivered a great message to all the guests and the entertainment from Heather Small was fabulous too and had everyone up on their feet. 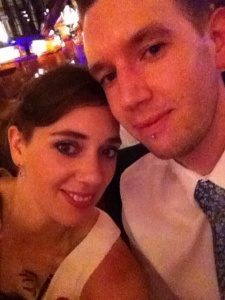 I had an amazing and wonderful time, the night was one that I will never forget and I am so grateful for the opportunity to have been involved. The THT team were fantastic and I felt looked after all day long, I had so much support from friends, family and colleagues who knew I was going, and even more people congratulating me afterwards. I am so lucky that I put up with relatively little discrimination or prejudice because of my status.

But not everyone is as fortunate, and that’s why events like this are so important. An incredible amount of money was raised which will help THT continue to deliver vital services to people living with HIV.

What I got out of the night most of all was to talk to the some of the guests who choose to support the charity. I’ve met a lot of other people living with the virus, who work for HIV organisations or in sexual health, but I’ve never had a chance to speak to the people who actually contribute financially, and it was terrific to do so. HIV is one of those causes that isn’t particularly popular with the public, it’s not “fluffy” and people can associate a sense of blame to those affected, it’s tied up with sex and drugs and for some reason there are people who are uncomfortable with that. So to be in a room with people who couldn’t care about all those things, and want to help end HIV was awesome.

2 thoughts on “All great change begins at the dinner table”