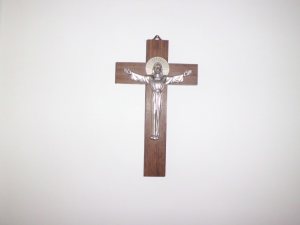 I spent the weekend visiting my dad in London, I’d not yet been to see his new house and thought I’d better seeing that him and his fiancé moved in last July and after all the trip from Manchester is only just over two hours on the train.

I was brought up Catholic but after escaping home life and moving to Lancaster I stopped go to church on Sundays and only went at significant times of the yearly, namely Christmas. But I stopped going after getting fed up of hearing priests waste their time and energy during their sermons preaching hatred of certain peoples in society instead of love and neighbourly appreciation for each other. My dad asked if I was going to go with them yesterday and I decided that I would. I’m not really sure why, I made it clear I was not going to sit through another gay-bashing sermon though. I was actually surprised, the priest was quite progressive from what I heard, and hinting that blame on dwindling congregations lays with the bishops and the clergy. It’s a shame the system as a whole isn’t so liberal.

My issue with the church is that it believes it can survive with its outdating thinking. If it doesn’t allow women and married people to become part of the priesthood there soon will be very few men queuing up to replace an aging clergy.

It’s a funny coincidence that today the Pope announced his resignation. I won’t be jumping for joy. Both he and his predecessor have surrounded themselves with like-minded conservatives. There is little hope that anyone with more freethinking ideas will be ‘elected’ to the position in the next few months. And that’s a shame for any hope the Vatican may change its stance on HIV.

Regular media updates seem to state their position has changed from one month to the next, one day they are promoting condom use to prevent the spread of the virus, the next they refute the claims entirely and state their committed to their belief that contraception is wrong or even immoral. Thousands of the church’s followers are left misguided and making the wrong decisions based on the opinions of someone they hold in high regard. This power over people is something that should be used for good not to control or influence others. This said what many don’t know is that the church actually provides an astonishing amount of health care to people living with HIV across the world.

I don’t pretend to be an outstanding ‘good Catholic boy’, I’m only human. But I am glad I was brought up with my faith and that I still hold it important to me. I don’t believe I need to visit a physical structure to engage in a religious experience and I believe prayers can be heard anywhere.