It felt like I had a little step back in time this morning back to my student days, iPod in my pocket, Le Tigre’s “Feminist Sweepstakes” on full blast as I sped across town …to a philosophy seminar? I was off to Manchester Metropolitan University for a day discussing Shame, Stigma and HIV. I have to admit that after a 9 year hiatus my philosophical brain struggled a little with the first session – but this is a topic I’m passionate about; why almost 20 years since the development of effective antiretroviral treatment are the psychosocial aspects of HIV treatment continually failing to keep up? Why have we failed to achieve a significant breakthrough against the stigma of HIV despite a medical achievement which ranked alongside the other great biomedical advancements of the 20th Century?

A day’s workshops would never be long enough to answer those questions but it was great to talk about HIV not only with people from a clinical background but in a philosophically, psychologically and sociologically context as well. I’ve learnt and listened to a lot of great things today.

Really glad to be home this evening though, brain on recharge after a busy few days… I’m not quite sure where the past week has gone. Seven days ago I was enjoying my last night in Sicily, eating food with the family in the villa after spending a day looking at Roman and Greek ruins, relaxing on a beach and eating ice cream in a pretty little village. 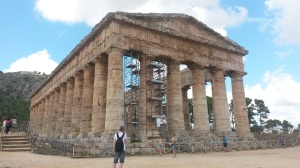 I’d barely landed back in the UK last Friday and I was preparing for Positively UK’s One Voice conference for people living with HIV. The day was really informative and I was lucky enough to join sessions about activism, TasP and PrEP, some emerging data regarding Stigma and then discuss challenges of living with HIV and the support required to deal with these with some of the other delegates.

As always it’s not just the speakers, content and debate that make these events great, it’s being able to meet and talk to other HIV+ people, something that’s easily taken for granted if you live in a bigger city with good support services. And it’s stigma that stops people from accessing these services or attending conferences they could benefit from. People can avoid reaching out and asking for help, or hide from just having a chat with other people living with the condition. That’s why the workshops today were important. There are people in society from various backgrounds and careers all looking to make a change, take a stand and break down barriers. We’re not alone in this fight, and I’m not alone in my passion to fight stigma – and it’s great to know that!