Skip to content
Posted on May 25, 2013December 29, 2019 by Alex Posted in My first decade, UncategorizedTagged AIDS, Exercise, Fitness, HIV

I should be at a Zumba class but the instructor had to cancel tonight so I thought I’d use the time to update the blog. Exercise was one of the last things on my mind soon after diagnosis, my initial rough spell during seroconversion meant I stopped going to the gym and once I was feeling better I’d lost the routine. For about five months I did nothing and then I found out I was HIV positive.

With that news I assumed I would be unhealthy and unfit for life, I had always naively associated HIV with weight loss, skinny men I’d seen in the village and a gaunt appearance. Luckily I realised reading the experiences of other people that this didn’t have to be the case. I was in a bad state to start with and probably didn’t go about my return to exercise in the best way: I chose to run a 5km Santa dash for charity with no training or warm up whatsoever. I was elated at the time that I managed to finish the race with my best friend in under 40 minutes, looking back now I realise how rubbish the time was, maybe I ran it backwards? I can’t remember. However, I was now engaged with exercise again and slowly built up a routine around the gym.

I soon took up some classes which I attend on a regular basis, Monday its kick boxing and Tuesday it’s Zumba. I can be competitive and there is no one I like beating more than myself, I’ve pushed myself a lot and love the feel-good factor I get from exercise. I’ve grown from a boy who would do anything to get out of PE to a guy who lives keeping fit and staying active. I’ve accomplished personal achievements since my diagnosis, fighting against the virus not allowing it to stop me from doing anything I want to. In the past three years I’ve managed to earn several belts (I’m up to Purple) and a Student of the Year award in kick boxing, represented my work at the Corporate Games in the Dragon Boat team: we came last but it’s the taking part that counts, and enhancing team building skills over a few beers the night before… and after… haha! I’ve completed more 5km runs and this year managed a 10km run in under 52 minutes as well.

I never thought I would become a sporty person before my diagnosis so to have done so after gives my confidence a real boost. I don’t care if I come across as bragging, I’m giving myself a big chufty badge, I might just be kicking and punching some pads on a Monday but I’m giving HIV a kick in the face the rest of the week. 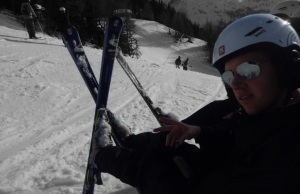