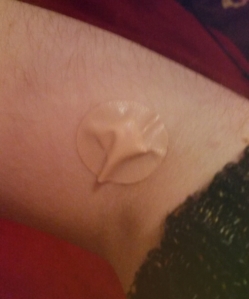 The year has got off to a good start, full swing in work, almost back to healthy eating and definitely back to the pre-Christmas exercise regime. Last year I wanted to ‘remain focused’ and I think I did more than achieve that, as I mentioned in my last blog it was great to end the year on a high with the Metro article.

And I’ve started 2014 with something just as exciting! I was pleasantly surprised when I was approached about submitting one of my photographs to an online multimedia exhibition called ‘Portraits of Hope: Artists’ responses to the ongoing AIDS crisis’. The curator has added my photo ‘The Red Ribbon’ to Edge New York’s website with some other amazing photos, sculpture, film and paintings; you can check it out here.

There are also a few other projects coming up that I will be getting involved with both in Manchester and Salford and I’m excited to tell you more about those nearer the time.

On a personal level this afternoon I was back at the hospital for my six monthly check-up. Blood pressure, bloods, urine and weight all taken, I won’t get the results until I go back in two weeks, I’ve not seen the consultant for a year now so it will be good to ask them a few questions I have on my mind as well. I wasn’t surprised but slightly annoyed that I’ve put on a little bit of weight, four kilos since August! My excuse is I’m usually weighed in the morning before eating anything and I’ve not been on the scales since I started the gym again back in September, so I am hoping at least some of the gain is muscle!

In the short term like most ‘resolutioneers’ I’ll be trying to eat healthy and avoiding all the bad foods I enjoy so much, hopefully the ‘January gymers’ won’t annoy me too much and I’ll be able to stick to my usual gym programme no problem. I’m glad I went back last week and went for my first 2014 run over the weekend, at least I feel like I have a little head start over those who were probably back in the gym tonight after work and blown away to cobwebs in my thighs and arms.

I’m more competitive with myself than I am other people, I want to push myself and prove that I can achieve new goals and accomplish anything I put my best efforts into. ‘New year, new me’ – no thanks, I’d rather keep being the same old me that did so much more than I thought I ever would last year, and strive to achieve the same over the next twelve months. Last year I wanted to remain focused, this year I want to maintain that and raise even more awareness about HIV.