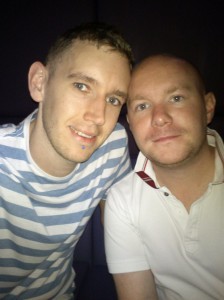 Tomorrow one of my best friends is flying to Australia to spend the next year living, travelling and working there. He’s one of the few people who knew about my status soon after I was diagnosed and for the past three years he’s been there to support, listen and put up with me ranting about sexual health, HIV or just my angst in general.

We met in work and after a few nights out with mutual friends soon realised we got on with each other and have been really good friends ever since. A lot of people would think that we can’t actually stand each other with the amount of arguing and bickering there is between us (cue married-couple cliché)  but we really are very good mates.

Of course he isn’t without his faults, but on the most part he really is a top guy. He never takes himself too seriously and is always up for a laugh and he’s got BALLS. The reason I say this is that just like, someone who belongs to a group within our society who is subject to stigma, so is he. But unlike me he has no choice about hiding how he is different to other people. He’s 4’10, ginger and gay. He’s not always had it easy, people looking and pointing, guys in bars wanting to lift him up, drunken women on hen-do’s wanting to have photos taken with him, but he can hold his own and he can rise above it, and that’s what I admire most about him. He might be pint sized but he’s stronger than most of the people I know.

I have learnt a lot from him and he is one of the reasons why I knew I could be open about my HIV status. If he can tolerate the prejudice he faces then I knew that I would be able to as well. He is brave, eager and focused (even though you might not always notice). His bravery is the reason why I know I don’t have to worry about him whilst he is the other side of the world away from all his family and friends. 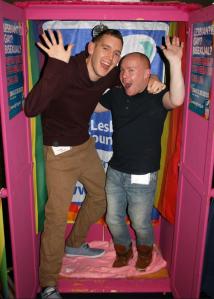 Not entirely sure what I will do now you’re fleeing the UK, who the hell am I going to annoy on Facebook, who can I drag to Thompsons for a night out and who am I going to wine to when Richard has pissed me off, haha! I’ll probably have to split these tasks amongst the rest of the gang until you’re home safe.

Gavin, you’re going to have an amazing time in Australia and I am so jealous of your little big adventure, but more importantly I am going to miss you! Good luck and stay safe. Hopefully me and Richard will make it out there to see you next year (PESKY PESKY!), so you better not come home early!

One thought on “Brave”